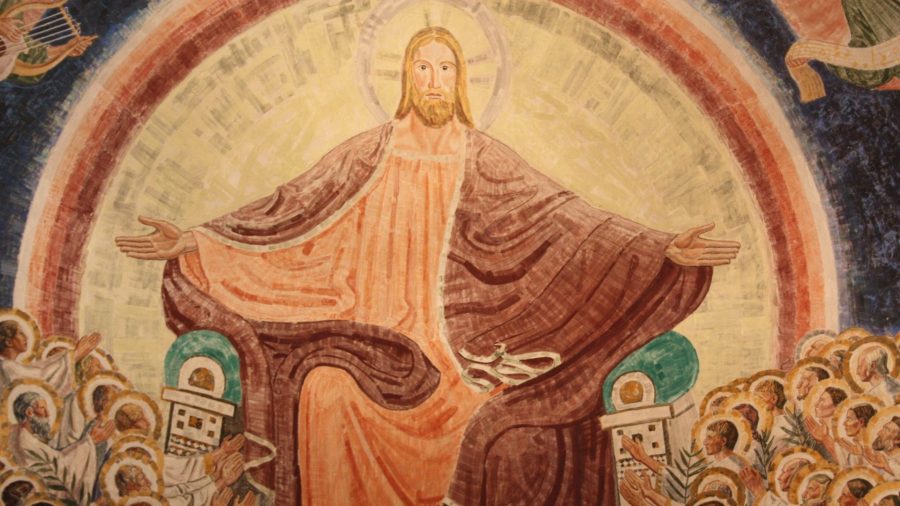 Grace, mercy, and peace to you from God our Father and our Lord and Saviour, Jesus Christ.

Are you familiar with the word “pericope”? A pericope is a term for what we call each of the readings we have on Sunday morning. Pericope comes from two Greek words “peri” which is the same piece found in the word “perimeter” and it means “around.” The second part “kopee” means a “cutting.” Each of our readings is like a circle cut around and taken out of a larger sheet of paper. This helps us to focus on a specific thing (and not be here all morning and afternoon reading entire books!) However, if you have managed to grow up and get to the age you are without ever learning the full stories of each of our readings (or you have forgot them) you may miss the connections and what our pericope is saying.

2 Samuel 7: The Old Testament reading is pretty straight forward. We have three people: King David, the prophet Nathan, and God. King David is living in a cedar palace and says to Nathan he wants to build a temple for God. Nathan says essentially, “sounds good!” Later that night, God comes to Nathan and says “Tell David thanks but no thanks. I’ll build him a house instead.” God goes on in detail describing the past and predicting the future.

Taking a step back and getting the bigger picture, King David is basically at the high point of his life here. He had defeated Goliath as a boy, been adored by many for years, loved and hated by the previous king, Saul. At this point, Saul, who had been out to kill David, had finally met his demise. David, after mourning Saul, had been set securely on the throne to God and successfully united all the tribes of Israel who now call him king. All his enemies have left him alone and he is finally enjoying the peace God has brought to him. When you finally finish all your tasks, sit down and look around, do you ever start thinking a little more about the people around you? Well, at this peak of David’s, he looks at where he is living and thinks “God should be living in a place even better than this” and wants to build God a Temple so He doesn’t have to live in a tent anymore..

What God speaks to Nathan to tell David is EXTREMELY important. God promises David something here. God says, “I will make for you a great name, like the name of the great ones of the earth. And I will appoint a place for my people Israel and will plant them, so that they may dwell in their own place and be disturbed no more. And violent men shall afflict them no more, as formerly, from the time that I  appointed judges over my people Israel. And I will give you rest from all your enemies. Moreover, the Lord declares to you that the Lord will make you a house. . . . And your house and your kingdom shall be made sure forever before me. Your throne shall be established forever.’”

God promises David a great name, a great place to live, no more enemies or violence, a house built by God Himself, and kingdom that will last forever. Sound pretty great for David, hey? Except, when we read on, this does not happen for David. David sees a married woman bathing on a roof, takes her, kills her husband, impregnates her. Later, his whole family implodes through sexual assault and slaughtering each other. David dies a heartbroken man, his kingdom soon divided and crumbles into pieces. So, what happened to David’s promise from God? What a mystery.

Well, when we read the pericope from Paul’s letter to the Roman Christians, we see him strengthening them by reminding them of the knowledge they now have. Knowledge that had been kept a secret for a long time before then. Paul says there was this big mystery that was hiding in plain sight in the Old Testament all along and God has made it known. Paul says this knowledge brings obedience to God. We now have this trust in God – this faith in Him! Paul says this mystery has been revealed to all nations.

So, what is it? Spoiler, it relates to David and God’s promise to him that never seemed to come true.

I mean, how could you trust God if He said He was going to do something and never did? How do you trust someone that never does what they say? It would be awful hard to – not smart in the least. What about someone who normally does everything they say, but have not done a certain, single thing, they said they would do? From David’s perspective, God is the latter. God had made so many promises that he made good on to David. God made so many promises to His people Israel that He made good on over and over. God proved Himself faithful to them and trustworthy and would act, yet His people always seem to distrust Him and turn away. Well, here, in the pericope from the Gospel of Luke, right at the start, God starts proving again that He is trustworthy again and will make good on His promises.

In light of God’s promise to King David we see this thing happening:

26In the sixth month the angel Gabriel was sent from God to a city of Galilee named Nazareth, 27to a virgin betrothed to a man whose name was Joseph, of the house of David. And the virgin’s name was Mary. 28And he came to her and said, “Greetings, O favored one, the Lord is with you!” 29But she was greatly troubled at the saying, and tried to discern what sort of greeting this might be. 30And the angel said to her, “Do not be afraid, Mary, for you have found favor with God. 31And behold, you will conceive in your womb and bear a son, and you shall call his name Jesus. 32He will be great and will be called the Son of the Most High. And the Lord God will give to him the throne of his father David, 33and he will reign over the house of Jacob forever, and of his kingdom there will be no end.”

Wow! Right? Direct fulfilment of what God promised King David a thousand years before! The mystery had been how this was going to be fulfilled. WE see it being fulfilled in Jesus. We see it happening, not with Jesus coming to be the greatest military commander ever seen, but by teaching peace, love, and judgement of those who hate God and their neighbour. We see Him doing this by dying on a cross and making death His plaything by coming back to life! And you know what? Jesus never stopped holding the power over death and the world. He kept on living and still lives today in heaven. Not because He died and went there the regular way of humanity, but because He left this earth fully alive to sit at God’s right hand and rule this world – still living! His kingdom does not have an end. He will come again to the earth, at the right time, to finally wipe out all evil and bring perfect peace on earth.

This mystery of God’s promise being fulfilled Jesus gives us reason to trust Him perfectly and be obedient to Him through faith in Him. Year after year we remember the start of His promise being fulfilled in Jesus coming from earth to live as one of us. We look to Jesus and the Hope, Peace, Joy, and Love He brings with Him as the fulfillment of God’s Word and Jesus promise to come again and raise David, and all of us, from the dead so that He can fully give us a great name, a place to live, no more enemies or violence, a house built by God, and a kingdom that will last forever. A paradise. Not one we deserve, but one given to us by God’s grace. Given through Jesus’ blood for our sin. Given because, to God, we like Mary are highly favoured. Given because God is faithful and reveals the mystery of Jesus to you and me.

This site uses Akismet to reduce spam. Learn how your comment data is processed.