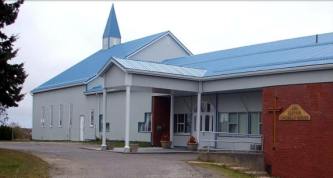 Record of work among the Lutheran people in Northwest Ontario began in 1907, although there had been some worship services conducted in the Waldhof (Gunne) area prior to 1907. Pastors and Missionaries came from various places to conduct worship services in Waldhof and Eagle River.

In the winter of 1938, a candidate, Arnold Vehling, was sent to the area to live in Dryden. He entered Canada on December 3, 1938 and settled at the Dixon Boarding House in Dryden. He was sent just as a missionary to survey the area and look for prospects. In the spring of 1939 he was called by the Minnesota District to be the first full time resident Lutheran pastor in the Dryden area. After being married in 1939, he returned to Dryden to live in a house on the north side of the track. Worship services were now being conducted in Dinorwic, Dyment, Vermllion Bay, Waldof, EagleRiver and in the pastor’s home in Dryden

The work of the Lutheran church in the Dryden area continued, but progressed very slowly. Pastors stayed for only a short time and long vacancies occurred between pastors. When Pastor Kempff left Dryden in 1947, the District Mission Board didn’t know exactly what to do with this parish. Pastor Donovan Bakalyar, serving in Fort William, agreed to serve as the vacancy pastor. His first trip to the area was made on May 10, 1948, and he continued to serve, with the assistance of three vicars until September 1955.

Actual work in Dryden stopped in 1947 and did not begin again until 1952. It was on August 5, 1952 that Pastor Bakalyar conducted a worship service in the Rutter home on Duke Street. Worship services continued in the the United Church, members’ homes, the curling rink, and the Ukranian Hall. until the summer of 1956 when the basement of the present church could be used in the fall .

Pastors who served in Dryden lived in various places, in Dixon’s Boarding House, the north side of the tracks, a house on Arthur Street, 89 Duke Street and St. Charles. A lot for a church on the corner of Arthur and Casimir was purchased, but in 1953 was sold because the Mission board felt a Lutheran Congregation could not be developed in Dryden. Later, the present church lot was purchased at the cost of $5,000.

In 1955 the name Our Saviour Lutheran Church, was chosen under Rev. R. Otto. A building committee was struck, a lot at 99 Albert St. purchased for $5,000.00 and in the spring of 1956 the building was started with the assistance of funds from the Church Extension Fund. A parsonage was purchased at the same time.

The first service in the new building was held on Christmas Eve, 1956, with 100 people present (membership was 86).

In March, 1957, decoration of the church was begun, with most of the work done by the members. Dedication of the new building took place on June 16, 1957. There was an active Ladies Aid. Services were also held at Dinorwic and Waldhof (later Vermilion Bay).

Red Lake became our mission (145 miles away), with Christ Lutheran dedicated in 1963.

Two more missions were opened–Hope in Sioux Lookout in 1971 and Faith in Ignace in 1974. Vicars were assigned to assist, starting in 1972. In 1975 some services were held in homes in Kenora.

Four church changes (additions, renovations) have taken place. On May 11, 1980, a mortgage burning was held. Rededication and 25th anniversary were held June 28, 1981.

On January 1, 1989, the congregation joined Lutheran Church-Canada and the Man.-Sask. District. In 1990, property adjacent to the church was purchased, with the assistance of the Church Extension Fund.

Our last service at 99 Albert Street was on January 8, 2006 after which we moved to our current location at 175 Cecil Ave. Ongoing renovations began!! It’s been a blessing to watch as our parishioners and contractors have transformed an aging school into a modern Church. Dedication of the new Church and our 50th anniversary were held June 25, 2006. Our current Parish Pastor is Rev. James Wood, a native of Dryden.

As of May 2009, stage one of our renovations to 175 Cecil Ave have been completed and we are well into stage two which will see much of the north end of the old building disappear to become our new sanctuary.